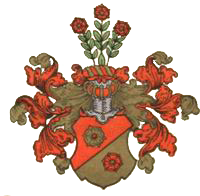 An unbroken lineage goes back to Bastian Roser, a fisherman. In 1553 he received citizenship in Strasburg. His son, Hans Roser, became a cooper. The following two generations remained in the cooper trade.

The origins of the line of the chambers of barrister Roser in Wuerttemberg are traced back through Johann Reinhard Roser to Heinrich Roser, a merchant of wine and also an innkeeper in Strasburg. Barrister Roser became manager and afterwards reeve in Köngen. There are lawyers, theologians and physicians in this line of descendants. State counselor Karl Roser headed the foreign ministry in Wuerttemberg during the years of the revolution of the 19th century. Wilhelm Roser found his place in the annals of medicine as a professor of surgery; there is still a Wilhelm Roser road in Marbach. The most famous and globally active artist in the family was puppeteer Albrecht Roser.

The tanner Kaspar Roser emigrated to Stuttgart in 1681 and became the progenitor of the wuerttembergian line of the tanner Rosers. In 1681 France annexed Strasburg and in 1985 lifted the edict of Nantes resulting in a noticable suppression of the evangelical confession. Close connections between the Roser families of Stuttgart and the Moravian church and pietism can be found later on. Christoph Heinrich Roser (1756-1847) was co-founder of the Württembergischen Bibelanstalt (Bible society of Wuerttemberg) which quickly grew to become the largest Bible publisher and distributor. 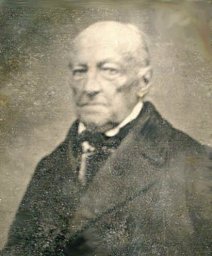 The Stuttgart tanner Jakob Heinrich Roser (1781-1849) was one of the pioneers of early industrialization in Wuerttemberg. In 1806 he took the step from being a craftsman to becoming an entrepreneur with his leather producing company Lederfabrik J. H. Roser, that later evolved into the Esslinger Lederfabrik (leather factory) and was reestablished in 1872 as the Feuerbacher Lederfabrik C. F. Roser (Carl Friedrich Roser). After the first world war the Esslinger Lederfabrik was no longer family-owned. The company in Feuerbach developed as an industry leader until 1998. In 1886 one of the Rosers who emigrated to the USA established a leather company that was in operation until 1964. 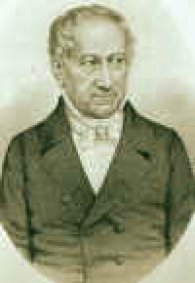 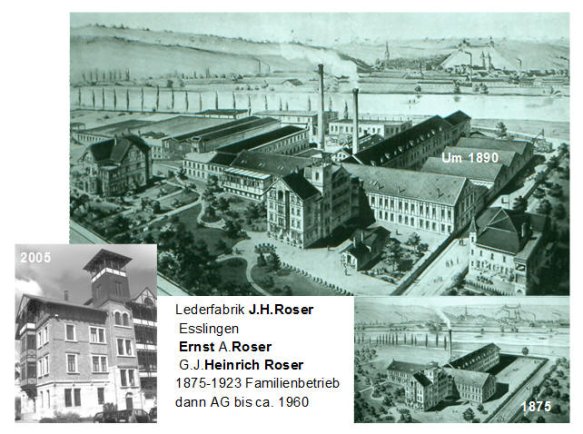 This square is named after the former Lederfabrik C. F. Roser

„The Roser Family immigrated from Strasburg and operated a tannery in Stuttgart from 1698. The master tanner Carl Friedrich Roser, the oldest son of Jakob Heinrich Roser, went into business for himself in 1834 with a tannery in Heilbronn which he relocated to Stuttgart in 1848. In 1872 he resettled in Feuerbach and built a factory. At the time there was enough room there for industrial development and until 1934 it was constantly being expanded and developed. The company in Feuerbach developed as one of the leading companies in the industry producing leather for furniture, cars and leather goods. During the second world war the company was the largest manufacturer of the synthetic „P-Sohle“. In 1944/45 air strikes caused great damage. After reconstruction in 1945 the company recovered rapidly. Thus in the mid 1980’s Roser held the monopoly for producing leather for cars, in addition he produced synthetic sheets and synthetic leather. In 1994 production was halted and the factory premises were sold. Since then new businesses, a medical center and restaurants have arisen on the former premises. The Bonatz building is now a listed building and serves as a cultural center.“ (Source: Festschrift 100 Jahre Lederfabrik C. F. Roser Stuttgart-Feuerbach 1834-1934, translated by Rudolf Alexander Roser and Chantal Roser)

The „Dieter-Roser-Bridge“ in Esslingen is a memorial to the mayor Roser who was in office from 1948 to 1966. As the head of department in the interior ministry he spearheaded the municipality reform in 1976.

Where does the name Roser come from and what about the crest?

There is no satisfactory interpretation among our family collective of the name. The oldest known crest dates from 1681, when our ancestors were tanners in Strasburg, and was already decorated with roses. They can be traced back until 1530. 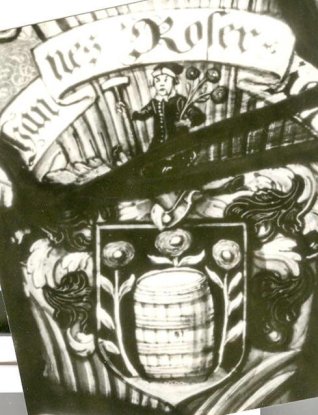 The state museum in Darmstadt exhibits the oldest known Roser crest. The heraldic shield shows a yellow barrel, surrounded by 3 long stemmed red flowers (perhaps roses?). The helmet decoration is a rising man dressed in black holding a yellow mallet in his right hand and 3 red long stemmed flowers (roses?) in his left. This illustration most likely combines the guild symbol of the barrel with the rose an attribute of the family name. The crest is part of a 56x36 stained glass picture, purchased from the city of Strasburg in 1819. Originally it was a decoration in the tanner’s guild room. This stained glass picture was painted in the studio of stained glass artist Hans Wilhelm Wolf. It was donated by Johann Peter Storck, member of the guild of tanners in Strasburg. This stained glass picture is described in the book of Susanne Beck-Lustenberger: “Stained glass paintings“ to be found in the state museum of Hessen in Darmstadt, Hanau 1973, pages 283-285.

The donated crest is surrounded with the names of honorable tanners in the guild. Above the previously mentioned crest the name Johannes Roser 1674 is written. He is our ancestor from the 4. Generation and lived from 1625 to 1716 (Genealogy 1926, page 7). As master tanner he played various important roles in his guild: In his role as quality controller he would stamp the approved barrels with his seal, as treasurer he was responsible for the assets of the guild, which also served for social benefits, and as juror he presumably participated in the initiation rituals of the guild to accept new members. He was married to Martha Mößner who bore him 10 children.

The line of the wuerttembergian barrister Roser can be traced back over Johann Reinhard Roser to his father Heinrich Roser, (born 1654), of whom he is the 3rd child; the 5th child, Kaspar Roser, *1659 established the line of the tanner Rosers in Stuttgart Wuerttemberg  (Genealogy pages 8-56). The 7th child, Philipp Roser, *1664, became pastor in Scharrachbergheim. Our cousin Ernst Schmidt / Vaihingen found an entry in the „Armorial de la Généralité d’ Alsace“ for Philipp with a crest of a red rose in a silver field. [http://gallica.bnf.fr/ark:/12148/bpt6k1105860/f602.item.zoom] 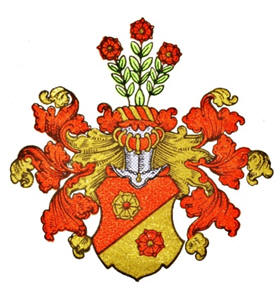 All traditional crests revert to roses as somehow giving their name. On the left you see the crest of tanner Johannes Roser in 1681, combing the guild symbol of the barrel with the roses. The right picture is a print of the signet ring that can be traced back to the grandparents of Ernst Roser (R431). This crest has been used by the aforementioned line of the barrister Roser since about 1725. (?) One can speculate: as the descendants who emigrated to Wuerttemberg were no longer tanners, but lawyers and in the administration profession, the barrel and the figure with the mallet were dropped from the crest but the roses remained.

The printed issues of the RVP genealogies from 1887 to 1926 used the following crest with the two roses. In the book from 1923 another interpretation of the name Roser is suggested. The name could have its origin in the old high German words hrod or hruom, meaning fame/glory.

Since 1887 a black and white drawing for easy use.